This is part of an article that appears on Sarah Hemstock's web site. Sarah is the daughter of the founders of a very well known Stafford kennel prefix - Jolihem - and, well, just go to her site and she details her current envolvement with Staffords and other activities better than I can here.

She has been working on her Stafford site for several months between her tough graduate school schedule. I recently received this email from her:

I intend to update my web page by the end of next week - please feel free to use any of the pictures/articles on your site but must be credited to the source.

So in honoring her wishes I give her full credit for the article that follows and the photos that are part of the Pedigree Archive for two of the Jolihem Kennel's most famous stud dogs Ch. Jolihem El Toro and Ch. Jolihem Dreadnought (photos below).

This is the second half of an article first published in the Stafford Magazine (UK) 1997.

The following article is based around correspondence published in "Dog World" newspaper earlier this year on an article entitled "Reasons to Breed." 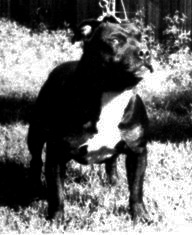 I believe that responsible dog owners should only breed when they want to keep a puppy, so just being the breeder of a puppy which is sold and then matures into a winning exhibit should not qualify a person to judge, since surely one way of proving a good "eye" is being able to pick out the "best" puppy from the litter.

Once it has been established that a judge is a competent stock person who has a "good eye" then the judge can move on to other breeds through the use of fairly devised tests and examinations like the one proposed by Betty Penn-Bull in her article "Fewer But Better Judges" (Dog World, January 3, 1997). However, I must emphasise that I think that any test should be practically based since a person with a good knowledge of stock may not be able to express themselves cogently when writing a critique.

As I have said, selection of judges should rely first and foremost on the quality of stock associated with their kennel, after this criteria has been fulfilled then other factors, such as tests, length of time in the breed, etc., should be considered.

My view that people should not breed unless they want to keep a puppy has been described as a "naive and judgemental" statement ("Reasons to Breed", Dog world, Feb. 1997). However, it has proved to be a very successful philosophy since the small family kennel with which I am associated (JOLIHEM) has produced/owned and campaigned 10 Staffordshire Bull Terrier champions (a breed record), 4 other CC winners and numerous stud book number and JW winners - all when only breeding when we wanted to keep a puppy. Proof that success and political correctness can go hand in hand. 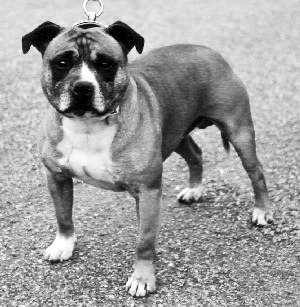 "Reasons to Breed" also stated that "people with a very small number of dogs are not always in a position to add another puppy to their numbers, and therefore only be able to keep a puppy on the death or re-homing of another dog". Dog owners should note that keeping a dog is a life-long commitment to that dog. My dogs' companionship is far more important to me than their physical attributes, so from a welfare standpoint, I would encourage people not to breed unless:

a) they intend keeping a puppy,

b) they are prepared to give their chosen puppy a good, loving home - even if it turns out to be unsuitable for showing, and

c) they should be able house all the puppies should the homes they go to prove to be unsuitable. 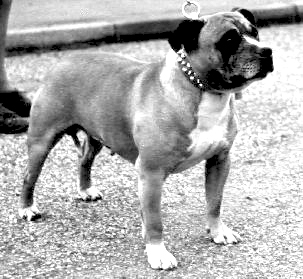 Waiting until you have room to keep a puppy may mean that your bitch is 4 or 5 years old before she has her first litter. However, I do not see that preventing this is a reason to breed as you could use your stud dog and buy in a good puppy. I, along with my colleagues at London University, have not seen any statistical evidence to say that a normal, healthy 4 to 5 year old bitch who is in whelp for the first time is at any greater risk than a 4 to 5 year old bitch who has had one or more litters. I would be very interested if someone could provide me with this statistical evidence. It used to be said that a bitch that had not been bred from was at increased risk from pyometra - but this has now been shown not to be the case. Risks from pregnancy in an older bitch arise from factors associated with age and the age of her eggs (females are born with all their eggs, unlike males who produce sperm throughout their life), and not from a lack of fitness for the pregnancy due to not previously having had a litter.

Also, I do not agree with breeding a litter just to see what they turn out like. Surely if you have selected the stud dog and know your own bitch's breeding you should have a fair idea of what the mating will produce, and you should be fully prepared to accept the consequences.

Finally, I believe people should not breed a litter unless they are attempting to "improve" the show quality of their existing stock. I would ask readers to examine the morality of the suggestion that breeders should produce "good quality pet puppies" in order to prevent sales from puppy farms (see "Reasons to Breed, Dog World, Feb. 1997). I have my own strong opinions on this. For SBT's this is a big problem and I am sure that we like to think of ourselves as responsible breeders and feel revulsion at the thought of puppy farmed litters or progeny produced by "back street breeders". However, due to the Stafford's great popularity more and more individuals are riding the "Staffordshire Bull Terrier Gravy Train", not only by breeding "good quality pet puppies", but also by providing an unending supply of "Staffie Consumables" which in the "good old days" used to be provided by the breed clubs for the benefit of the breed. Where have we gone wrong?