The StaffordMall invites and welcomes contributions on any and all Stafford-related subjects from owners and fanciers around the world. Please contact Terry or Carolyn Stewart.

The AKC Standard - Our Opinion 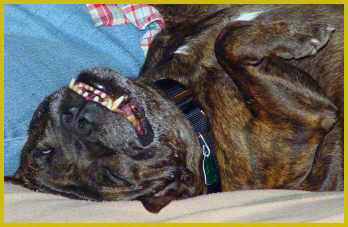 When I speak of the show dog, it is not to malign the dogs or the sport. I do feel however, that show dogs should be held firmly to the standard since they are represented to the public to be the best examples of the breed.

How are we to judge a dog for correct type when the original function of the dog is obsolete? We must study the history of the breed and accept the fact that the Stafford was bred to be the ultimate fighting machine. Then we must ask ourselves, do the dogs being presented in the ring today look like they could still do the job they were originally bred to do. I don't think so.

Does this mean that I am suggesting or condoning the breeding of dogs for sport? Of course not.

I do think that we can present, to the public, show dogs, that are bred more true to type and beautiful as well.

"The Staffordshire Bull Terrier is a smooth-coated dog. It should be of great strength for its size and, although muscular, should be active and agile."

Today we are seeing show specimens that, although they are 16 inches in height, are weighing 45 pounds or more. These dogs may be winning in the show ring but would certainly loose in the pit. At that height to weight ratio, they would not have the agility or endurance of a fighting dog. I read a description of the Stafford that stated that they should be envisioned as a tank in battle, with all the functions of a tank. I agree that a Stafford should be square, but tank like - I don't think so. A tank may be able to climb hills, crush objects by sheer weight, track through water, etc. But, a tank is a ponderous piece of equipment unable to support it's weight on anything but tread. And compared to other equipment used in battle, is more difficult to maneuver. If our forefathers who actually fought their dogs felt that a tank like dog could win in the pit they would have bred them that way -- they didn't. They wanted a dog that was quick on it's feet, able to spin on it's hindquarters, dodge flashing teeth, lunge forward in an instant, and not run out of gas.

"Height at shoulder: 14 to 16 inches. Weight: Dogs, 28 to 38 pounds; Bitches, 24 to 34 pounds, these heights being related to weights. Nonconformity with these limits is a fault. In Proportion, the length of back, from wither to tailset, is equal to the distance from withers to the ground."

The majority of show dogs enter the ring faulted from the start. They do not conform to the above standards, especially in the weight department. Perhaps the judges are looking at a dog that is 16 inches tall, 16 inches long, and 16 inches wide. That certainly is square, but not what the old-timers had in mind as the perfect fighting machine.

"Short, deep through, broad skull, very pronounced cheek muscles, distinct stop, short foreface, black nose. Pink (Dudley) nose to be considered a serious fault. EYES - Dark preferable, but may bear some relation to coat color. Round, of medium size, and set to look straight ahead. Light eyes or pink eye rims to be considered a fault, except that where the coat surrounding the eye is white the eye rim may be pink. EARS - Rose or half-pricked and not large. Full drop or full pricked to be considered a fault. MOUTH - A bite in which the outer side of the lower incisors touches the inner side of the upper incisors. The lips should be tight and clean. The badly undershot or overshot bite is a serious fault."

A special type of head and jaw is required of a fighting dog. The head should be ample enough to support the jaw muscles that are quite pronounced. When we talk about a wide skull what we really mean is a good strong jaw. Breeding for large heads has become an obsession. A fighting dog needs an ample head not a huge head. The entire head should be in proper proportion to the rest of the dog. When they state short foreface in the standard, they did not mean an extremely short foreface. Some believe that a longer muzzle means a less powerful bite -- tell that to a crocodile.

"The neck is muscular, rather short, clean in outline and gradually widening toward the shoulders. The body is close coupled, with a level topline, wide front, deep brisket and well sprung ribs being rather light in the loins. The tail is undocked, of medium length, low set, tapering to a point and carried rather low. It should not curl much and may be likened to an old-fashioned pump handle. A tail that is too long or badly curled is a fault."

The neck of many of today's show specimens is too short in comparison to the neck of the old fighting dogs to be functional. There is no truth to the argument that a shorter neck decreases injury to the throat. A neck that is too short is a neck that is less flexible. I believe that the proper length of neck, is one that is long enough to have that regal crest so appreciated by the old-timers. A Stafford should appear well balanced, the perfect blend of Bull and Terrier. He should be square and have good length of leg. Again, height to weight ratio.

"Legs straight and well boned, set rather far apart, without looseness at the shoulders and showing no weakness at the pasterns, from which point the feet turn out a little. Dewclaws on the forelegs may be removed. The feet should be well padded, strong and of medium size."

The Standard specifies forelegs set rather far apart. A dog lacking space for generous lung capacity cannot be expected to have the stamina that is needed in an athletic dog. A dog with forelegs set too far apart will usually have a heavy front, and a rolling gait. I also read recently in describing the Stafford's gait that a dog should have a general parallel movement combined with a rolling motion -- a rolling motion should be definitely out with the Stafford. This is a Bulldog trait and a detriment to a fighting dog. The forequarters should be well boned and strong so as not to break, and straight with the feet turning slightly out to provide good balance.

"The hindquarters should be well muscled, hocks let down with stifles well bent. Legs should be parallel when viewed from behind. Dewclaws, if any, on the hind legs are generally removed. Feet as in front."

Hindquarters with well bent stifles are necessary for proper thrust and balance in a fighting dog. The Standard calls for well muscled hindquarters, not the beefy, heavy boned, straight stifled hindquarters, that we are now seeing in too many of the show dogs. The hind legs should have a well bent stifle, with the second thigh muscle well developed. The hindquarters are extremely important since they need to be strong and flexible to allow for a wide range of motion. There was more to a dog fight than just going a short distance across the pit. A dog with weak hindquarters or too straight a stifle would never be able to hang in there for the long haul. A dog fight could last several hours.

"Smooth, short and close to the skin, not to be trimmed or de-whiskered."

A Stafford that is well cared for and in good health usually meets this criteria without a problem.

With the exception of the show dog, the color of a dog does not hinder it's function so I find this unimportant.

"Free, powerful and agile with economy of effort. Legs moving parallel when viewed from front or rear. Discernible drive from hind legs."

"From the past history of the Staffordshire Bull Terrier, the modern dog draws its character of indomitable courage, high intelligence, and tenacity. This, coupled with its affection for its friends, and children in particular, its off-duty quietness and trustworthy stability, makes it a foremost all-purpose dog."

For breeding purposes, I would never use a dog that didn't have a "sharp" temperament towards other dogs when appropriate. Aggression towards people should never be tolerated.

Has anyone actually seen a Stafford this color? Yes we have.