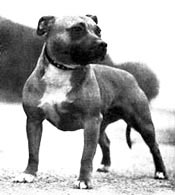 The StaffordMall invites and welcomes contributions on any and all Stafford-related subjects from owners and fanciers around the world. Please contact Terry or Carolyn Stewart.

Ch. Brocliffe Warhawks Tuff and Ch. Red Royal of Dremark; were two exceptional dogs owned by Robert and Patty Lee. Red Royal was a lovely bitch that Bob imported from Ireland. She was the dam of several of our original bitches, and a "working" dog in Ireland, but was never shown there. Bob was reluctant to show her, as she was 17" in height, and 39 lbs. in weight (working weight). I felt that she was a beautifully balanced bitch and finally persuaded Bob to enter her in the Del Valle show held in Pleasanton, California. Three months later she had her Championship, and went BOB over specials several times. She was the number three ranked SBT bitch by the SBTCI in 1986.

A breeder friend of ours was researching the source of a hair lip problem in some of his breedings. The "Unknown" pedigree is a copy of a handwritten pedigree that he sent to Mrs. Brooks of the Brocliffe Kennel prefix in England. He wanted her opinion on the possible dogs or bitches that might be contributing to this problem. This is the type of research more breeders should be doing before breeding, and especially if they have done a breeding that produces a problem. Investigate and find the problem. If anyone knows the name of the "Unknown" please e-mail the information. We are not sure it was a Stafford that was the subject of this pedigree. But our breeder friend only bred Staffords and Mrs. Brooks was a Stafford Breeder. But we don't recognize any of the names in the pedigree. A doggy mystery to solve.

Ch. Peck's Chip Off The Block

Peck's Pride of the 5 Towns